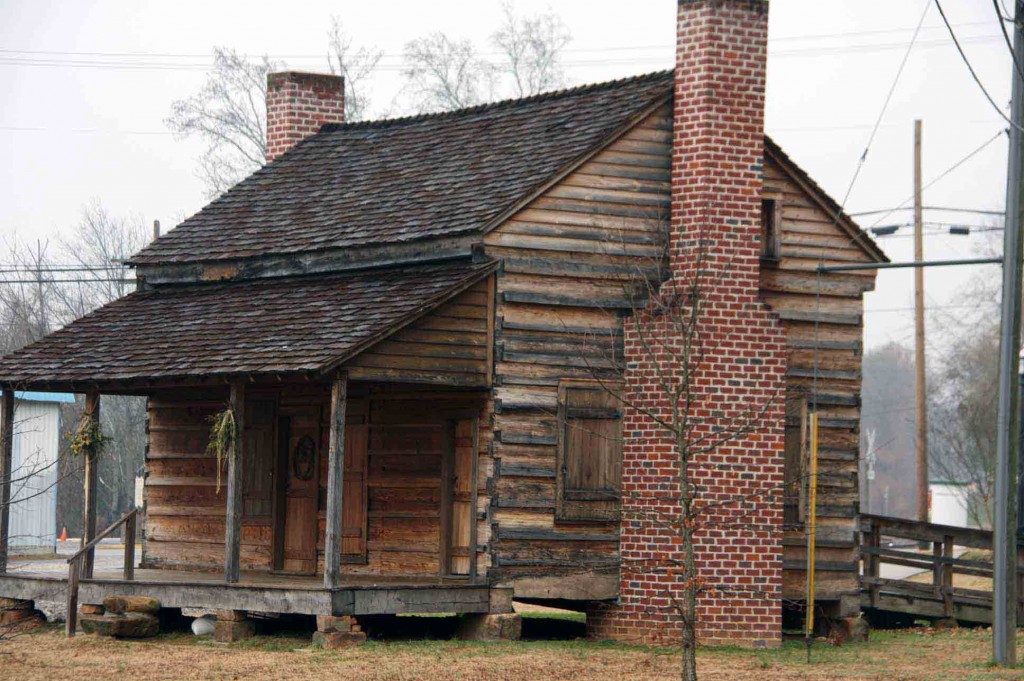 At last, the needed repairs to the Couey House have been accomplished. The house can again be a central point of attraction in our county’s Christmas celebrations. The Chattooga County Historical Society is delighted to have participated at various stages of the restoration and preservation of this structure. We thought you might enjoy knowing a little more of the history of this fine old pioneer home.

The story of Chattooga County’s Couey house begins many years before the founding of the county. As we now celebrate the 175th anniversary of the creation of the county, it will be of interest to some readers to look at the background of a structure that very likely existed by December 1838.

Joseph Couey, born in 1764 in County Down, Ireland, came with his parents, William and Jane Couey, to America aboard the ship Britannia. The Britannia arrived in Charleston in August of 1767. Joseph, at 15 or 16, joined the army and fought with honor throughout the Revolutionary War. He was in every major skirmish in the frontier campaigns of Georgia and South Carolina. In 1792, he married Ann, and they became parents of at least seven children in a marriage that lasted over a half-century. Joseph died in 1844 and is believed to be buried in an unmarked grave at the Farmersville Cemetery in Chattooga County, one of only four venerable veterans of the Revolution known to rest beneath Chattooga sod.

Family in Chattooga Area Before 1838

It was the fourth son of Joseph and Ann who made the greatest mark in Chattooga County. Andrew M. Couey (1807-1882) settled in Dirt Town Valley with his wife, the former Fereby Dempsey. Andrew was a successful farmer and one of two original ruling elders of the Bethel Presbyterian Church near his home. He gave the land (for a nominal five dollars) on which the Pleasant Grove Baptist Church was founded. One family historian dates the settlement of the Coueys in the area that would become Chattooga County as early as 1835. It is certain they were here by 1838 and that they began to build a home almost immediately after their arrival.

Andrew’s eldest sons, Henry and Jesse, would have been just old enough to help their father in the construction. The architect who supervised the restoration of the Couey house made the following observations: “It is obvious from the materials used and the detailing that the Coueys had some wealth. The shell of the house and the chimneys were constructed on the site with local materials. However, the house was finished with fine materials that were obtained from non-local manufacturers. The windows, hardware and the mantels were most likely made elsewhere.”

Couey family history tells us that they initially constructed a lean-to and that is where the family lived while the new home was being raised. Fereby Dempsey Couey was no doubt a hearty soul but one can imagine how eager she was to move into the new house.

Andrew Couey was a skilled craftsman. The home is constructed largely of squared logs 4” by 14”. The sill and cap logs (which would play a critical role in the future of the house) were 10” x 10” and were placed across stone piers at the front and back of the house. The builder used half-dovetail notches to erect the logs. It is interesting to note that the house was never chinked but that riven boards were placed across the notches in winter to keep out the draft. The removal of the boards in late spring provided the 1830s form of air conditioning!

Family tradition says that there was an extensive addition at the rear of the house. While the architects did not rule out this possibility, they did indicate that there was no archeological evidence recovered to support the idea of an addition. In the beginning the home had only a front and rear entrance. The windows came later. A hand drill was used to make a gap for the saw to cut windows into the logs. The window frames were then pegged into the logs.

It has been a source of some debate as to whether the chimneys were both originally stone or one was stone and brick, as in the reconstruction. The late Jo Baker Johnson visited the house many times in her youth and recalled a brick in the chimney with “1846” carved in it. This would indicate that the brick chimney likely replaced a previous stone structure.

The finished structure was a story and a half. The half-story loft was used for sleeping for the children and for storage. Originally, the stair to the second story could only be accessed from the porch. The first known addition to the house was the boxing in of the porch to provide additional sleeping quarters for the growing family—or to accommodate travelling drummers and preachers. The house was the centerpiece of a very profitable 400 acre farm—as can be attested by the decennial federal agricultural censuses.

During the War Between the States the Coueys suffered as much or more than most of their neighbors. In addition to all the depredations of both the Union and Confederate armies, who carried away everything they could as they passed through the county, Andrew and Fereby lost their son, Andrew Jackson Couey, to camp illness in Virginia in late 1861, less than a year after his enlistment. Elder son Henry had served as part of the home guard and the youngest son, Eli, served throughout the war and was present at the surrender at Appomattox. Andrew Couey applied to the Southern Claims Commission for restitution for the valuable goods requisitioned and stolen by the invading armies but was denied because he had provided sustenance to his sons in the Confederate army.

The home would eventually pass to Andrew and Fereby’s eldest son, Henry Livingston Couey, and from Henry to his youngest daughter, Flora Mildred Couey Owings. In the early 1990s, the widening of Highway 27 became a priority for the Georgia Department of Transportation (DOT). Chattooga’s official historian, Bob Baker (a direct descendant of Andrew and Fereby Couey), and Tom Weesner called the significance of the house to the attention of the Chattooga County Historical Society. The Historical Society sent a letter of inquiry to the DOT and on August 2, 1994 the property was obtained by DOT, who then began the above-referenced architectural investigation.

Every piece of the house was carefully labeled before dismantling began. The logs were sent to Tennessee for repair and treatment. In most cases, the logs were in very sound shape. In others, repair or replacement were the only options. When all the logs were in good shape, the structure was reassembled in a warehouse to assure that all the logs fit together. The architects, the general contractor, field supervisor and DOT representatives assembled at the warehouse in Greenville, Tennessee to inspect and approve the repairs.

The structure was then removed to Dowdy Park in Summerville. In 1997, with appropriate fanfare, the city of Summerville welcomed the addition of this log home to the north end of the park—near the historic Summerville Depot, funding for the restoration of which was also obtained from DOT. The entire Couey House project had cost the DOT something in excess of $300,000. The city’s contribution had been the filling and grading of the swampy area to ensure proper drainage. In a ceremony that included the mayor, state representative, city council, historical society president, representatives of the Couey family and other dignitaries, the city accepted the gift of the landmark and accepted the responsibility of its maintenance going forward.

Nell W. Farrar, an active member of the Chattooga County Historical Society and a former leader in Summerville’s Better Hometown program, commented “In 2014 with our lives surrounded by so many conveniences and comforts, it is a valuable educational experience to view a structure such as the Couey house and consider how pioneers lived in Chattooga County in the early 1800’s. The Georgia Department of Transportation presented this log house as a gift to the city of Summerville. It was a valuable gift not only to the city but also to the people of Summerville and Chattooga County.”

The first challenge in the responsibility for the maintenance of the Couey House arose in 2005. In a bewildering incident the house was significantly vandalized and was set on fire. Heroic and timely efforts on the part of the Summerville Fire Department—for which Chattooga preservation enthusiasts will ever be grateful—saved the house. In that instance, the city of Summerville quickly undertook the repairs necessary to restore the house and, at the suggestion of historian Bob Baker, removed the preacher/drummer rooms from the front porch restoring the porch and facade to its earliest appearance.

From 1998, the house was maintained by the City of Summerville as an example of historic preservation and for the enjoyment and education of those who visit the park, its unique train turntable, the Historic Depot and the historic downtown commercial district.

The addition of a ramp at the back door to make the house handicap-accessible proved the next complication in the maintenance of the house. Over the next few years, the weight of the ramp apparently placed an inordinate amount of pressure on the 160-year-old rear sill of the house. The sill cracked and, although the culprit ramp was subsequently removed, the sill has now snapped and the entire structure was in peril. Thanks to the City of Summerville and a generous grant from the Tillotson-Menlo Foundation, the needed repairs have been made. The Historical Society is in the process of getting flashing put on the cabin to help to avoid further damage.

Future of the Couey House

Historical Society president, Gene McGinnis, recently commented “Many towns across America today regret some buildings they have lost in the name of progress and economy and now in hindsight wish they had preserved. It has been said a town with no old buildings is like a man with no memory. We are fortunate to have a few landmarks like the Couey House in Chattooga County—as we can all name other buildings we wish had been preserved. To understand and respect our past enables us to better navigate our future.”

The Couey house is the only such pioneer structure in Chattooga County that is available to the public. Less than twenty pre-1850 structures remain in the county today, and almost none pre-date the Couey house. This house illustrates how our ancestors, black and white, made homes on what was then the Georgia frontier. The Coueys arrived in the county just prior to the “Great Removal” and they briefly had Cherokee neighbors.

In its earliest days in the park, the Chattooga County Historical Society assisted the city with the preservation and furnishing of the house as well as with the documentation of the history surrounding it. The house offers a marvelous opportunity for interpretive history lessons. There have been demonstrations of hearth cooking, soap making and old-time story telling in and around the house. At a time when historic preservation is becoming a priority in almost all progressive communities in our country, we have an obligation to preserve landmarks like the Couey house for future generations of Chattooga Countians.